Roll on the 1800's. Things can only get better. Right? One of the intentions of British Prime Mister, William Pitt (rhymes with shit) was to bring in Catholic emancipation with the union (the right to vote and take a seat in parliament). He believed it would be easier to achieve emancipation for Catholics if they were a minority in a United Kingdom rather then a majority in the Kingdom of Ireland - though what's the point of your vote means nothing? Unfortunately the king was George lll. Remember him? The loonie German that lost the Americas - well Georgie Porgie was as king also head of the Anglican church and would not allow emancipation so Pitt quit (rhymes with shit). Within 4 years Pitt was back but the moment had passed and he was busy dealing with a short French trouble maker.

George III lays down the law. No friend of freedom or democracy

While the penal laws were still in effect they had diminished in severity since the late 1700s - Catholics could now serve in the army, property rights improved and importantly some Catholics could vote....men with certain property rights. This was seized up by a crafty (a cute whoore in local speak) Kerry born lawyer called Daniel O'Connell - Danny Bhoy knew there was nothing in the law that could stop him running for election, the problem was if he won as a Catholic he could not take the oath of allegiance to the inheritor of the bollox of Henry the 8th as Defender of the Faith. So Danny throws his hat in the ring and faces off against the hand picked candidate of the Duke of Wellington and whips his arse. The Brits have a problem now, there is an elected member of Parliament who won't take the oath and his core supporters a generation before rebelled massively and bloodily. The Brits blink and the oath is gone. DOC in MP for county Clare.

With O'Connell now in the Houses of Parliament others were elected and soon O`O'Connell was heading up the movement to repel the Act of Union. O'Connell was quite the political organizer and through church gate collections a war chest of funds was build that would put an American presidential candidate to shame, he also organized in-conjunction with the Young Ireland movement monster meetings to agitate and show support for repel of the union. The first Million Man March was to be organized at Clontarf in 1843 (see part 1 for the significance of Clontarf) a good 150 years before Spike Lee. Peel the then Prime Minister wasn't going to let this happen and sent in troops with cannons. DOC being the Gandhi like statesman backed down and for his trouble was arrested, tried and jailed along with the leaders of the Young Ireland movement. He spent almost a year in the can before the House of Lords had him sprung.

Neck - The Fields of Athenry

Economically things were crap. In the1820s famine came close and there was the first large scale Irish emigration to the new word. But the population continued to grow as it shot up from 2.5 million in 1800 to 8 million 1845. Ireland was essentially an agricultural economy and expected to be the breadbasket for the rapidly industrializing England (industry competition with England was not allowed going back to the 1400s and the Statutes of Kilkenny). Now while parts of Ireland are very rich in agricultural land other parts are poor especially the boggy midlands and the poor lands of the West of Ireland. The main reason for the increase in population was the potato. Now despite the fact the average Irish man looks like a potato this tumor is native to the Americas and introduced to Ireland by the Elizabethan planter Sir Walter Raleigh - famous for covering a puddle with his cloak for Lizzie so she wouldn't get her feet wet though fat lot of good it did him in the end as his head ended up in a basket. The old potato became the staple diet of Paddy and Biddy and not just because of the taste. It was a high yield crop that could be cultivated on poor land and small holdings - by 1845 90% of Irish farms were 10 acres or less and many thousands more had mere patches of mud to grow their all important crop. 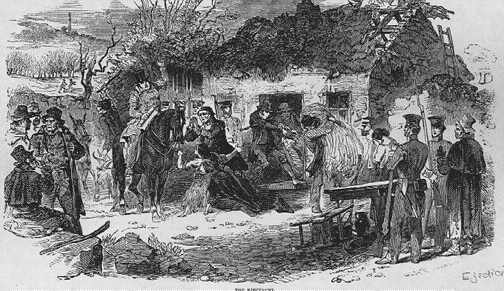 In 1845 the crop failed because of a blight that came in from America, the crop failed again in 1846 and 1847 (Black 47) and the great hunger became the great famine. The policy of the government in London exacerbated the famine and when public works projects were put in place it was to little too late, corn was brought in from America to be sold to the starving while Ireland was still exporting more food produce then was coming in. Lord Trevelyan, the British administrator in Ireland did not believe in government assistance and personally believed the famine was a punishment from God upon the lazy Irish peasant class and the feckless landlord class.

"The judgement of God sent the calamity to teach the Irish a lesson, that calamity must not be too much mitigated. …The real evil with which we have to contend is not the physical evil of the Famine, but the moral evil of the selfish, perverse and turbulent character of the people". Sir Charles Edward Trevelyan, Assistant Secretary to HM Treasury, official in charge of famine relief, December 1846.

By 1852 Ireland's population was reduced to 6.5m with an estimated one million dead and one million left the country with the bulk of the exiles outta the clutches of Britannia and now in the United States.

The Mickey Finns - The Ballad Of Duffy's Cut

The famine not only changed the course of Irish history but also America where the potato and the blight originated. While there was Irish emigration to the US prior to the Great Famine this was the first wave of massive non-Anglo emigration to America. The US was open to the immigration as it need the labor to dig canals, build the railroads, work in the mills and fight in its wars - the war of 1848 was underway and the US was screaming our for cannon fodder (though things didn't always go to plan like when Jon Riley took his Irish troops over to the Mexican side cos he didn't think the war was just and disliked the poor treatment of the Irish in the American army)

The Irish were exiled and angry. Poor, excluded and exploited. They were most likely to be found in the slums of the Yankee east coast doing the jobs the Yankee didn't want. There were anti-Irish riots in Philadelphia and New York and a catholic convent was burned down by an angry mob in Boston. The Irish used the political experience learned in Ireland and within a generation most big East coast American cities were under Irish political control. The American Civil War was a huge turning point for the Irish, and while many Irish were against emancipation of the slaves- how quickly they forget - and feared free slaves coming north and undercutting them for jobs, the Irish did show their loyalty to their adopted homeland and fought with valor (for both sides)

Larkin - A Nation Once Again

One group that was to use the Civil War for its advantage as The Fenians Brotherhood. Formed in New York City in 1858 the Fenians were a secret society whose aim was to drive the Brits outta Ireland. The Fenians knew the war would be a good source of trained and armed solders. With the war over the Fenians staged a rebellion in Ireland (it failed), they invaded Canada (three times), invented the submarine and undertook a dynamite campaign in England. The Fenian were the boogie man of Victorian Britain and condemned by the Church.

"when we look down into the fathomless depth of this infamy of the heads of the Fenian conspiracy, we must acknowledge that eternity is not long enough, nor hell hot enough to punish such miscreants" - Bishop Moriarty of Kerry

The Battle of Ridgeway